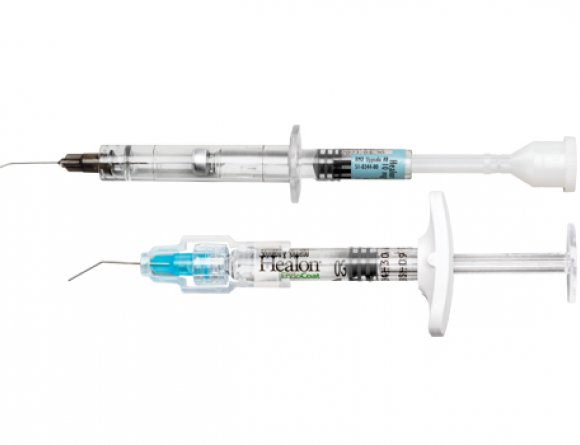 A Powerful Pairing of HEALON® PRO and HEALON EndoCoat® OVDs

The HEALON Duet® PRO Dual Pack features the protection of the HEALON EndoCoat® Ophthalmic Viscoelastic Device (OVD) and the reliability of the HEALON® PRO OVD in a single, convenient package.

A Powerful Pairing of HEALON® PRO and HEALON EndoCoat® OVDs

The HEALON Duet® PRO Dual Pack features the protection of the HEALON EndoCoat® Ophthalmic Viscoelastic Device (OVD) and the reliability of the HEALON® PRO OVD in a single, convenient package.

HEALON EndoCoat® OVD is an ophthalmic viscoelastic containing 3% sodium hyaluronate indicated for use as a surgical aid in patients undergoing ophthalmic anterior segment procedures including:

HEALON EndoCoat® OVD maintains a deep chamber during anterior segment surgery, aids in tissue manipulation during surgery, enhances visualization during the surgical procedure and protects the corneal endothelium and other ocular tissue. The viscoelasticity of the solution maintains the normal position of the vitreous face and prevents formation of a flat chamber during surgery. It may also be used to coat intraocular lenses and insertion instruments prior to intraocular lens implantation.

At present, there are no contraindications to the use of HEALON EndoCoat® OVD when used as recommended.

The HEALON EndoCoat® OVD Delivery system is not designed or intended to be attached to instruments other than the one provided with the product. Failure to follow the "Directions for Use" may result in cannula detachment. Mixing of quaternary ammonium salts, such as benzalkonium chloride, with sodium hyaluronate results in the formation of a precipitate. The eye should not be irrigated with any solution containing benzalkonium chloride if HEALON EndoCoat® OVD is to be used during surgery.

Injection of viscoelastics creates pressure in the syringe. To prevent expulsion of the cannula into the eye, ensure that the cannula is securely attached to the fitting on the syringe. Use of the cannula guard is recommended. The cannula should be fastened securely to the syringe; however, over tightening may cause the hub to weaken and possibly detach from the syringe. Extrusion of a test droplet is recommended prior to entering the eye, and excessive force on the plunger should be avoided. Do not reuse the cannula. This could release particulate matter. Product and cannula are for single use only. Re-use may cause eye inflammation. The potential for early and short-term postoperative intraocular pressure (IOP) spikes exists with dispersive OVDs, which potentially require more time and care to remove from the eye. Therefore, it is recommended that HEALON EndoCoat® OVD be removed from the eye completely by irrigating and aspirating with sterile irrigation solution to reduce the risk of early postoperative IOP spikes. Observe the usual precautions taken during anterior segment surgery. Pre-existing glaucoma, the surgery itself, or retained viscoelastic (particularly in patients with compromised trabecular meshwork) can cause increased intraocular pressure after the procedure. The following precautions should be carefully considered:

HEALON EndoCoat® OVD does not require refrigeration. If refrigerated, HEALON EndoCoat® OVD should be allowed to attain room temperature prior to use. There have been isolated reports of diffuse particulates or haziness appearing after injection of viscoelastics into the eye. While such reports are infrequent and seldom associated with any effects on ocular tissue, the physician should be aware of this occurrence. If observed, the viscoelastic should be removed by irrigation and/or aspiration. HEALON EndoCoat® OVD is derived from microbial fermentation by a purified proprietary process. Although precautions have been taken to make this device protein-free, it may contain trace amounts of protein. The physician should be aware of the potential allergic risks such as postoperative inflammation that can occur with injection of biological materials.

Because sodium hyaluronate is a polysaccharide present in many tissues of the body, it is extremely well tolerated in human eyes. There have been reports of transient postoperative ocular inflammation (oral and/or topical steroid treatments were administered) and transient postoperative increases in intraocular pressure during clinical trials with viscoelastics. In addition to the above, the following adverse reactions have been reported following the use of sodium hyaluronate in intraocular surgery: inflammation, corneal edema, increased intraocular pressure, secondary glaucoma and corneal decompensation. All of the adverse reactions described above are potential adverse reactions for HEALON EndoCoat® OVD.

During the clinical trial, elevated intraocular pressure ≥ 30 mmHg occurated at a rate of 10.5% in the HEALON EndoCoat® OVD group, and treatment of cystoid macular edema (CME) occurred at a rate of 0.5%.

The HEALON® PRO OVD is indicated for use as a surgical aid in cataract extraction (intra- and extracapsular), IOL implantation, corneal transplant, glaucoma filtration and retinal attachment surgery.

In surgical procedures in the anterior segment of the eye, instillation of the HEALON® PRO OVD serves to maintain a deep anterior chamber during surgery, allowing for efficient manipulation with less trauma to the corneal endothelium and other surrounding tissues. Furthermore, its viscoelasticity helps to push back the vitreous face and prevent formation of a postoperative flat chamber.

In posterior segment surgery the HEALON® PRO OVD serves as a surgical aid to gently separate, maneuver and hold tissues. The HEALON® PRO OVD creates a clear field of vision thereby facilitating intra- and post-operative inspection of the retina and photocoagulation.

At present there are no known contraindications to the use of the HEALON® PRO OVD when used as recommended.

Those normally associated with the surgical procedure being performed. Overfilling the anterior or posterior segment of the eye with the HEALON® PRO OVD may cause increased intraocular pressure, glaucoma, or other ocular damage. Postoperative intraocular pressure may also be elevated as a result of preexisting glaucoma, compromised outflow and by operative procedures and sequelae thereto, including enzymatic zonulysis, absence of an iridectomy, trauma to filtration structures, and by blood and lenticular remnants in the anterior chamber. Since the exact role of these factors is difficult to predict in any individual case, the following precautions are recommended:

Care should be taken to avoid trapping air bubbles behind the HEALON® PRO OVD. Because of reports of an occasional release of minute rubber particles, presumably formed when the diaphragm is punctured, the physician should be aware of this potential problem. Express a small amount of the HEALON® PRO OVD from the syringe prior to use, and carefully examine the remainder as it is injected. Reprocessed cannulas should not be used. Sporadic reports have been received indicating that the HEALON® OVD may become ”cloudy” or form a slight precipitate following instillation into the eye. The clinical significance of these reports, if any, is not known since the majority received to date does not indicate any harmful effects on ocular tissues. The physician should be aware of this phenomenon and, should it be observed, remove the cloudy or precipitated material by irrigation and/or aspiration. In vitro laboratory studies suggest that this phenomenon may be related to interactions with certain concomitantly administered ophthalmic medications. Use only if solution is clear. Product and cannula are for single use only. Re-use may cause eye inflammation. The potential for early and short-term post-operative intraocular pressure (IOP) spikes exists with dispersive OVDs, which potentially require more time and care to remove from the eye. Therefore, it is recommended that HEALON® PRO OVD be removed from the eye completely by irrigating and aspirating with sterile irrigation solution to reduce the risk of early postoperative IOP spikes. Do not use if the blister pack has been damaged.