The Three Dimensions of Vision Satisfaction

Satisfaction with vision performance involves much more than visual acuity alone. Can we harness this concept to ensure the contact lens we prescribe meets our patients’ needs?

During our long days, most of us challenge our visual system with complex and changing situations such as:

We take for granted our ability to perform this large and varied array of tasks seamlessly and efficiently. So, any visual disturbance arising over the course of the day immediately raises our awareness and potentially lowers our vision satisfaction.

The visual system is incredibly complex. Multiple elements gather, focus, capture and process light to make sense of our visual environment. The cornea and crystalline lens are the refractive elements that make up the imaging components of the visual system. Images are transduced by photoreceptors, converting visible electromagnetic radiation into electrical signals. But how the brain translates these signals to perceive the qualities of a scene and objects within it –such as colour, location, luminosity, movement, shape, size and texture – is less well understood.

Even more challenging are attempts to determine the quality of visual perception with a measure of satisfaction. This process is confounded by cognitive factors, linguistics, attention, adaptation, and environment. Visual satisfaction is also influenced by factors such as contrast sensitivity, stereoacuity and visual fields as well as visual acuity.1 And visual discomfort contributes significantly to visual satisfaction, as seen with long-term digital device use, and 3D displays and virtual reality systems.2,3

Our visual system has evolved to accomplish a specific set of tasks. But changing demands are now challenging our vision more than ever. Today, we may spend more than half of our waking hours in front of digital devices.4 Asthenopic symptoms increase as the amount of near work increases.5 And if most of this near work is with small digital devices (phone, tablet), symptoms may be exacerbated. With these devices, shorter working distances (typically 32cm, but often as close as 19cm) and small font sizes (typically 1.6mm7) require 6/3 acuity for comfortable prolonged reading.6,7 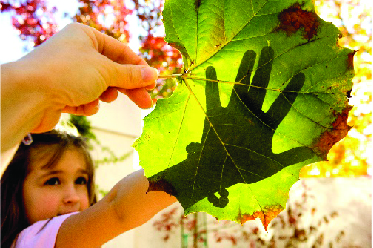 We hypothesise that vision satisfaction is driven primarily by three dimensions of vision: spatial awareness, discriminating efficiency and visual endurance. The first two dimensions relate to functional vision and describe our ability to execute the visual tasks that our visual system evolved to perform: near, intermediate and distance tasks, colour, contrast and movement detection. The third dimension – visual endurance – provides a measure of the transient impact of biological and environmental factors on vision satisfaction.

Broadly, spatial awareness refers to the perception of objects in the surrounding environment, understanding their meaning and location, and a projection of their status in the near future.11 While much of this process is cognitive, it is underpinned by two critical elements of the visual system: visual field and depth perception (Figure 1). 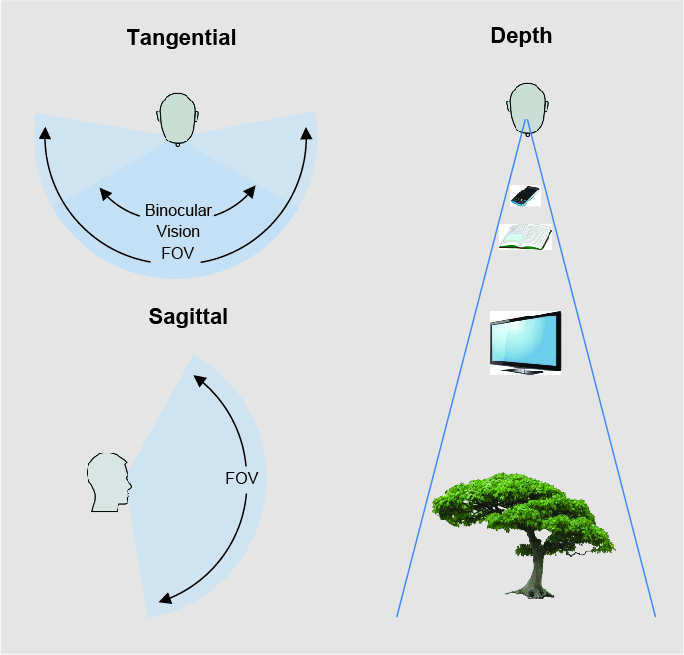 In the human eye, field of view (FOV) varies with facial anatomy, giving an asymmetric FOV of approximately 60° nasally, 60° superiorly, 70° inferiorly and 100° temporally.12 As a result, a typical binocular FOV is 135° sagittal and 200° tangential.13

Although stereopsis does not improve the performance of all depth-related tasks, it does enhance tasks such as detecting the direction and speed of approach, and the processing speed of depth information.17

Spatial awareness, the first dimension of vision satisfaction, refers to our ability to perceive visual stimuli in the spatial volume of interest.

Discriminating efficiency is defined as the ratio of correct discriminations to the total number of discriminations, where discrimination refers to the recognition of differences between elements in the environment. While much of this process is cognitive, it is underpinned by some critical capabilities of the visual system: resolution, chromatic contrast sensitivity, motion detection threshold and stereoacuity, (Figure 2).

Resolution refers to the minimum distance at which two points can be distinguished. It is often specified as the minimum angle of resolution in units of arc seconds.18 Other than by colour, an object is distinguishable due to its contrast and geometrical dimensions. Chromatic contrast refers to differences in chromaticity in a scene or image.19 It contributes significantly to the perception of contour and object recognition in natural scenes.20

Motion detection threshold refers to the minimum displacement needed for accurate assessment of direction of motion.21 And stereoacuity is the smallest depth interval a subject can detect; it is specified by the threshold difference in binocular disparity in arc seconds.17

All four measures contribute to the visual system’s discriminating efficiency, the second dimension of vision satisfaction.

Patients expect the same seamless, comfortable vision at any point in time, any day, regardless of the task or environment. Specifically, they expect a lack of awareness of their spatial and discriminating vision efficiency. However, evolution has given humans an innate capacity to notice changes and to ignore constant, stable stimuli.

Consequently, any biological or environmental factor triggering a change in vision quality immediately raises awareness and is registered as, at best, inconvenience or, at worst, discomfort. In fact, an association has recently been demonstratead between quality of vision and ocular surface sensation.22 Environmental factors affecting vision involve tasks that our visual system has not had time to evolve to, such as prolonged near work, night driving or digital device use.

As we have seen, prolonged near tasks and digital devices present a unique set of issues that also include ocular dryness due to reduced blinking. Night driving issues vary from noticing lane demarcations or reading street signs to the glare from incoming headlights.

Environmental factors affecting vision relate to dryness-inducing air conditioning whether in a car, office or department store; low humidity as during air travel; as well as sudden changes in luminance such as moving from indoors to outdoors or photostress due to glare from the sun. Diabetes and dry eye have been identified as biological sources of vision fluctuation.23,24 The tear film, another key refractive element in the visual system, can also introduce transient refractive effects when unstable.25,26

Hence visual endurance, the third dimension of visual satisfaction, provides a measure for the expectation of seamless vision across tasks and over time.

To summarise, visual satisfaction is driven by much more than visual acuity alone and encompasses visual endurance as well as many aspects of functional vision (Figure 3). 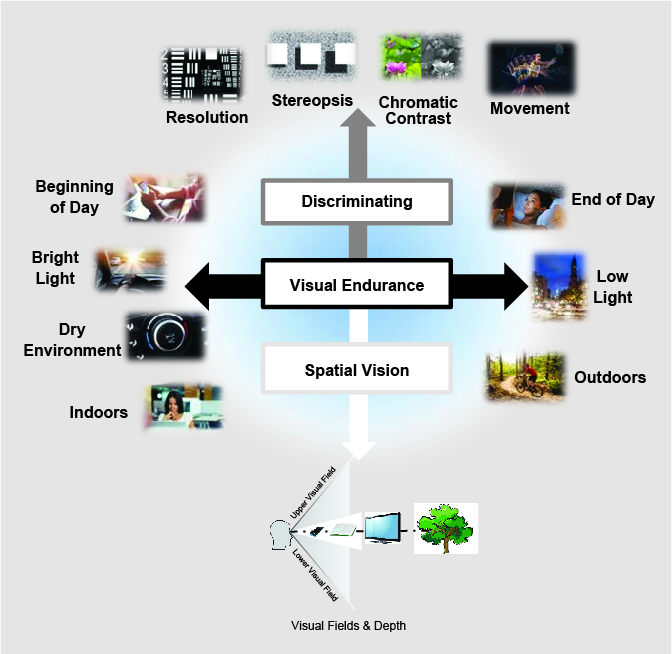 Now that we have a better understanding of visual satisfaction, how can we ensure the vision correction we prescribe meets our patients’ needs? Whilst we cannot do much more in the areas of spatial awareness and discriminating efficiency, it is in the area of visual endurance that we might be able to make an impact. Let’s use what we know about patient satisfaction with contact lenses to explore this concept further.

It is widely accepted clinically that soft contact lenses provide excellent vision to patients. Recently we carried out a prospective, randomized, subject- masked, 3-arm parallel-group clinical study. Eligible subjects were non-presbyopic, habitual wearers of spherical silicone-hydrogel contact lens within the power range available, and had uneventful systemic and ocular histories. After obtaining informed consent, the subjects were randomly selected to wear one of three study lenses on both eyes. The lenses were worn on a daily wear basis with follow-up visits occurring at one and two weeks after the initial dispensing. A total of 240 subjects completed the study as the total cohort.

Figure 4 plots Snellen visual acuity in ACUVUE OASYS® wearers during the 2-week wear period.27 More than 93% of wearers achieve 20/20 or better post-fit, at 1-week and at 2-weeks. 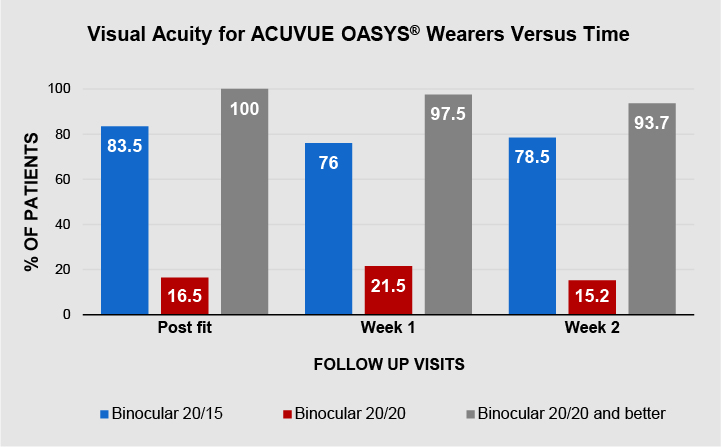 But the story is quite different when we ask patients about their level of satisfaction with aspects of visual performance using the CLUE (Contact Lens User Experience™) Questionnaire.28 CLUE scores are statistically designed such that average lens performance is considered to have an aggregate CLUE score of 60. Data mining was used to analyse the CLUE Vision satisfaction response of more than 6,000 pre-presbyopic patients aged 18 -39, wearing a variety of different spherical contact lens brands from several manufacturers across a range of lens powers.

On a scale of 0 (low satisfaction) to 120 (high satisfaction), this population scores in the low 60s, indicating slightly above average satisfaction but hardly a resounding clinical outcome. Response variance shows a small percentage of patients seemingly satisfied with their vision, but also a large proportion of patients scoring their habitual vision below 50, indicating that the soft contact lens industry is not meeting the expectations of a significant proportion of this population. Investigating further, they were more likely to dislike their vision at the end of the day and experience fluctuation in the quality of vision.

Another recent study examined a day in the life of soft contact lens wearers.29 Subjects agreed to respond every 2 hours to text messages probing their activities, environments, symptoms, emotions/ moods, comfort, satisfaction and vision quality. Subjects were aged 18-39 years, wore contact lenses at least 4 days per week and at least 12 hours per day, and had visited their eye care professional within the past two years. Their habitual lenses were spherical and from any brand from any manufacturer. A total of 243 subjects completed the study, of whom 142 were reusable wearers and 101 daily disposable wearers.

A majority (62%) experienced a decline in comfort, overall lens satisfaction and vision quality over the course of the day (Figure 5). ‘Decliners’ were associated with busier lifestyles and experienced at least 10 different activities through the day, particularly tasks that involved reading, using a device with a screen, and doing housework. Among symptoms reported, decliners were most likely to complain of tired eyes (69%) and dry eyes (65%).

So, although patients may record excellent vision when measured by Snellen acuity, probing more deeply into aspects of visual performance reveals many are less than satisfied with their current lenses. 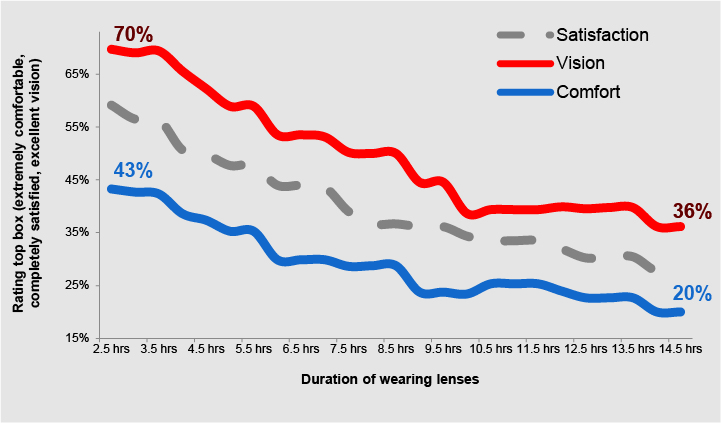 Vision satisfaction is influenced by three dimensions: spatial awareness, discriminating efficiency and visual endurance. Visual acuity alone does not provide a full picture since vision satisfaction relates not only to functional vision but to changing tasks and environments that are challenging our visual system more than ever. As we have seen, current contact lens products are not fully satisfying patients’ visual needs, particularly as they go through their busy days and experience many different activities.

It is in the area of visual endurance that clinicians currently have the potential to make the biggest impact on patients’ visual satisfaction. Best practice currently would be to ensure that a contact lens accurately corrects the refractive error, including any astigmatism; ensure that the fit is stable and that the optical quality of the lens is optimal. It is very important that the material can support a stable tear film over the course of a long day.

Currently, vision and comfort are the principal measures we use to assess the performance of the lens, and Snellen visual acuity is the usual method of assessing vision. In the future, we may need to consider a wider range of vision metrics, assess visual symptoms in greater depth, and find new ways of monitoring performance across the course of a day’s wear, if we are to truly satisfy our patients.

There is also an opportunity for further product innovation to enhance visual performance and drive greater levels of patient-reported visual satisfaction. We look to the future where these needs are fulfilled through advanced designs that may be more adapted or specialised for particular applications.

This publication is similar to the article “The Three Dimensions of Vision Satisfaction” that appeared in the April 2018 issue of Contact Lens Spectrum and is used with permission by PentaVision LLC.

ACUVUE® Brand Contact Lenses are indicated for vision correction. As with any contact lens, eye problems, including corneal ulcers, can develop. Some wearers may experience mild irritation, itching or discomfort. Lenses should not be prescribed if patients have any eye infection, or experience eye discomfort, excessive tearing, vision changes, redness or other eye problems. Consult the package insert for complete information. Complete information is also available from Johnson & Johnson Vision Care, Inc. by calling 1-800-843-2020 or by visiting acuvueprofessional.com. 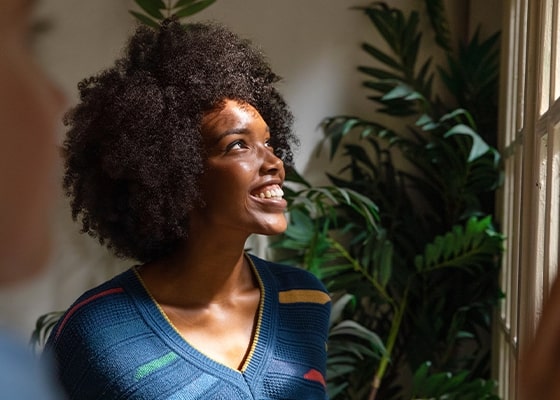 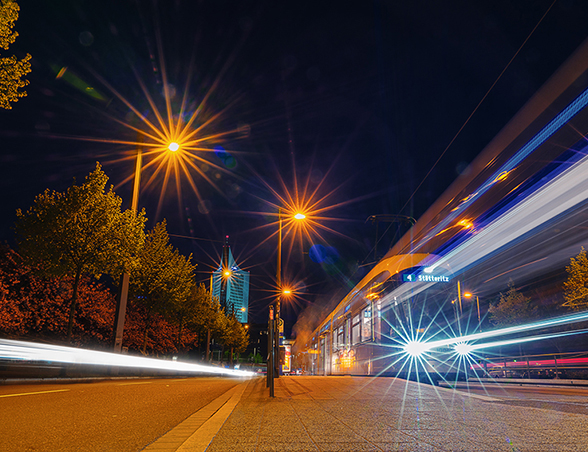 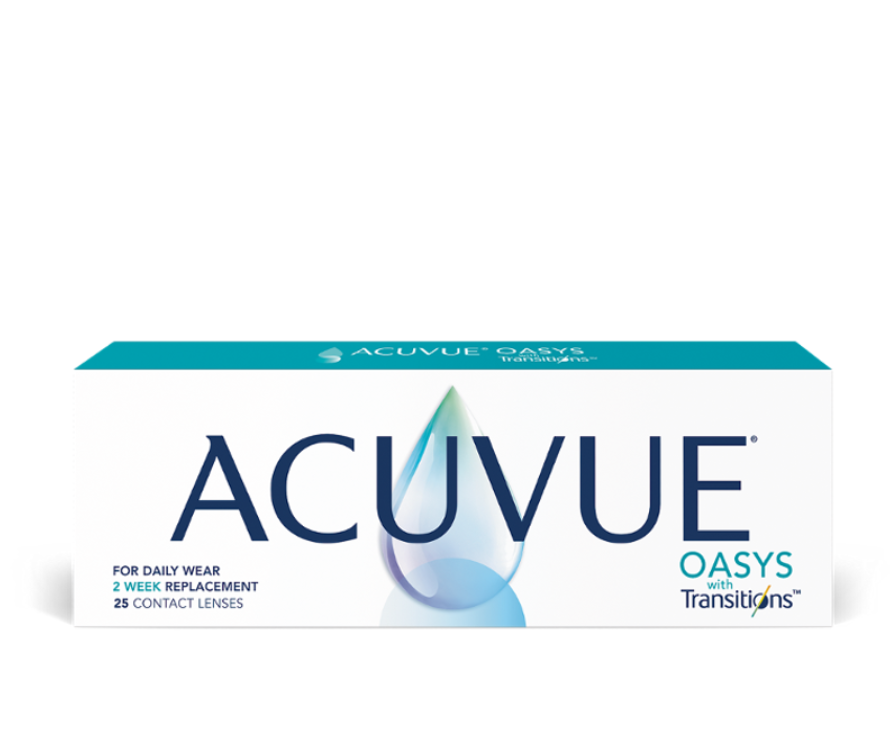